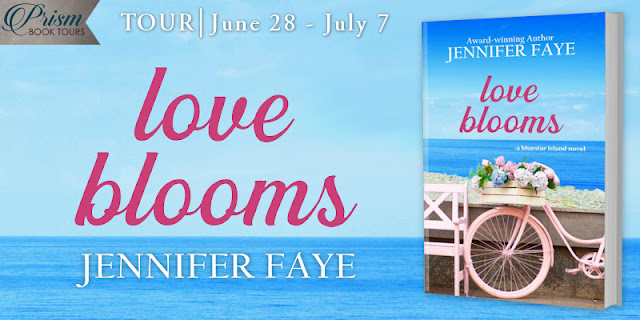 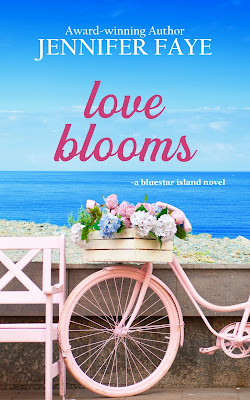 Love Blooms
(Bluestar Island #1)
By Jennifer Faye
Contemporary Romance
Paperback & ebook, 284 Pages
April 13, 2021
“With the bloom of springtime flowers…
comes the opportunity for new beginnings.”
He's an injured firefighter. She bakes the most delightful treats. When their worlds collide will the baker help heal the firefighter with a mix of blueberry muffins and her caring way?
The elegant baker, Hannah Bell, has always lived on Bluestar Island with her family. While still grieving for her father, who died in a fire, she focuses all of her energy on making her dream come true--opening her very own bakery. But when a broken water pipe washes away her carefully laid plans, she's on the verge of losing everything.
New York firefighter Ethan Walker's life is in a tailspin after he's injured on-the-job. When an urgent call detours him to Bluestar Island, he agrees to help his lovable but meddlesome great-aunt. But organizing the island's Spring Fling proves a lot harder than he originally imagined. He needs help...and fast.
Under the magic of Bluestar Island's sea breeze and warm sunshine, Hannah and Ethan must not only face their immediate obstacles but also their own turning points in life. Will they have to do that alone? With a leap of faith and a dash of romance, they might just find the perfect mix to make their dreams come true.
Includes a delicious recipe for The Elegant Baker's Blueberry Crumble Muffin!
(Affiliate links included.)
Goodreads | BookBub | Amazon | B&N | Apple Books | Kobo | Google Play
Other Books in the Series 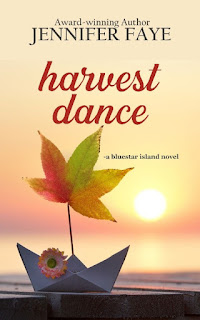 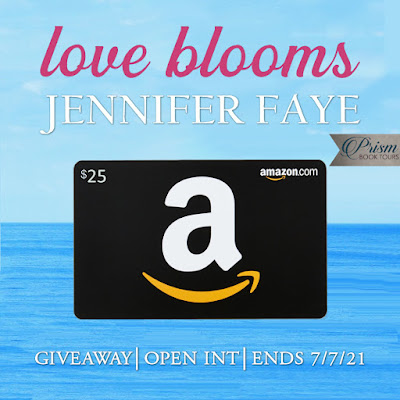 Thank you in advance to the author, Jennifer Faye, for providing a complimentary review copy. A positive review was not required or requested, all words are my own.

I have been a fan of Faye’s writing since I read the first book in her Bartolini Legacy series – The Prince and the Wedding Planner. Since then, I’ve that entire series, two of her other Harlequin Romance line books (one from her most recent series – Bound by a Ring and a Secret from her Wedding Bells at Lake Como series), and her Hallmark book – Christmas in Bayberry. As a result, Faye has become one of my “must-read” authors.

To be honest, most of those stories I could dive right in and read right through them. This one was a bit harder than the others to navigate despite the super sweet cover that made me think I was on vacation. The short chapters were a bonus and once I got into the book, I was able to read it for short periods. Overall, I LOVED reading it, however Hannah was a bit tedious to deal with at times.

The first book in the Bluestar Island series focuses on Hannah Bell, a baker who has a few issues in trying to open her bakery; and Ethan Walker, a firefighter recovering from an on-the-job injury that haunts him.

And, sadly, Ethan reminds Hannah of her father who died in a fire. That doesn’t start things off well. His “aunt” Birdie is a real trip though and is trying to push Ethan and Hannah together.

Alternating between Ethan, Hannah, and even Birdie’s POV; Love Blooms reads like one of those Hallmark movies – a sweet, slow (almost non-existent) burn romance that is chock full of realistic experiences, tragedy, and a community feel.

Ethan gets word of his aunt’s fall, and as a result, he’s on Bluestar Island to watch over Peaches. It is there he meets Hannah who is set to open her bakery after some renovations when an accident happens.

Hannah is upset because of the fact that her dream might end before it begins. Luckily, Ethan is there to help until the fire department shows up.

Despite the fact that a flood could’ve been worse, it might bankrupt Hannah to complete it. The insurance will only restore to the point before the flood, not the renovations to OPEN it. That’s pretty understandable. They aren’t in the business for improvement, only restoration/repairs to “pre-accident” condition.

Even the town’s “gossip”, Agnes Dewey gives up on the bakery right away. The bakery will become a contentious point later on during a confrontation with Agnes and Hannah.

Little Nikki has faith in her aunt, but Sam (Hannah’s brother) doesn’t seem so sure. Even the firefighters cheer Hannah on despite her absence around the firehouse since her father’s death.

Ethan offers his services and after checking his references, Hannah accepts his offer. Though she is very reluctant. And, at times her reluctance is off-putting. Something that big couldn’t be done on her own. It wasn’t feasible and it wasn’t affordable either.

Ethan’s aunt Birdie has her own reasons for trying to get back up and running – she’s the organizer for the festival Spring Fling. That is until Ethan offers. It’s clear he is in over his head once he sees the binder – so, he and Hannah switch duties. She’ll organize, he’ll restore. I loved that! It worked perfectly!

But, all isn’t perfect on the island though – Ethan is having nightmares from the accident and all Hannah can do is focus on the bakery. Even Birdie knows something is wrong with Ethan.

The more he’s on the island, the more he begins to rethink heading home, especially when they work together to make sure everything comes together. The island’s healing powers is also helping him.

One big hiccup comes along with a point I thought was sweet. When looking for something to make the bakery unique, they go to an estate sale. When she was outbid for a chandelier, Ethan bid on it. She felt he overstepped as it reminded her of her ex-boyfriend.

That causes a rift between the two which makes their work even more challenging. But, despite that, nearly everyone on the island thinks there is something towards the two. And, that is what Birdie is hoping.

As they work together, Hannah is working against her own anxiety with regard to getting the bakery open on time. It was almost a constant theme with her. And, I understood – only to a point. Ethan is beginning to re-think his career and if he’d ever be ready to go out on another call. He doesn’t want to disappoint his father.

Despite the issues I had with Hannah, I really did love this book! Love Blooms truly has that small-town feel that makes it the perfect summer and beach-read despite the realistic, tragic, and honest stories. It is clear to see how much the tragedies that befall firefighters affect their family, as well as themselves. Some families are proud despite loss, some get re-involved with a firefighter, and some have lingering anger.

It was interesting to see Hannah and her mother have a different take on dating a firefighter, the biggest problem Hannah has with Ethan. And, Faye heightens the fear and anxiety with a vivid description of a fire that Ethan responds to on the island. Readers see both Ethan’s calling and Hannah’s fear mixed in.

Ethan was the standout star for me. As was Hannah’s niece Nikki. She is such a cutie, but I definitely wanted more of Dash’s antics. Baby goats and kids? What’s not to like?

Being the first book, this easily stands on its own. However, readers will want to return to Bluestar Island to read Sam’s story though which seems to get set up in chapter 21. I’m also wondering if their sister Em will get a story as well. I’m hoping to learn more of what Agnes’ problem with Hannah is as there is definitely a history, especially with the way the woman confronts her regarding the bakery.

This, much like like Faye’s Harlequin Romance stories, is an overall clean read. There is no foul language. There are no real intimate scenes either, in fact the romance between Hannah and Ethan doesn’t pick up until the last of the novel – almost the last few pages.

There are no references to God or faith so those looking for a romance without those elements will find it in this book.

There were a few typos – one notable was Chief Campbell. At one point he is referred to as Chief, Captain, then Chief. The typos didn’t detract too much from the story, but certainly made it a tad confusing as to what was going on.

Fans of the author and genre will likely enjoy this read.